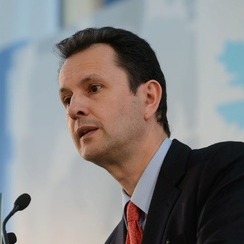 Antonio Lucena de Faria created his first business when he was 15 years old. His only job started in 1985 and lasted less than two years during which he was a Consultant for Arthur Andersen & Co. in the Minneapolis, USA office. In 1987 he founded Methodus Sistemas S.A., a Consulting and Software Development company specialized in Financial Services, and has been the President of the Board since then. In 1999 he started PortalFinanceiro.com S.A. and MTDS, SGPS. S.A. and was the President of both companies. In 2000 he was one of the founders and the CEO of forumB2B.com, a partnership between Methodus, EDP and GALP. In 2002 António was one of the three founders of Selplus S.A. In 2008 he created FundManager Lda., a software company specialized in Real Estate Fund Management. In 2010 he was the founder of ActionFlow.com and was the first Portuguese invited to pitch a project at DEMO in Silicon Valley, California. In 2012 he was the founder of Fábrica de Startups and is currently the President and CEO of this startup accelerator. António is also the organizer of the Energia de Portugal project, a partnership between Expresso, EDP and Fábrica de Startups and member and coordinator of the Conselho Nacional de Empreendedorismo e Inovação (CNEI). He also served as Chairman of the Young President’s Organization Portuguese Chapter. Antonio has a degree in Economics from Universidade Católica Portuguesa and a MBA from the Carlson School of Management, University of Minnesota, USA. During his twenty five years of professional experience, António participated in several management courses including at HEC, Jouy an Jousas, France, London Business School, London, UK, Babson College, Boston, USA and Harvard Business School, Boston, USA. António was a co-author of the book “A Alma do Negócio” and currently is finishing the book “Starting”. He also collaborated in the creation of the book “Business Model Generation”, by Alex Ostwerwalder and Yves Pigneau.

Antonio Lucena de Faria doesn't have any images in his gallery.