🇪🇸 In our blog in Spanish:
You are at Blog > Understanding startup investment > Diversification and the probability of independent events:…

Hereunder we would like to explain why it is so important and strongly recommend from Startupxplore to have a well-diversified investment portfolio. Although we are sometimes totally convinced that we are investing in a “winning horse”, the odds of a company failing in its beginnings are high, so it is best to reduce that risk. How can we do that? DIVERSIFYING!

It’s something really easy to understand, it’s about putting the “eggs” (money) in different “baskets” (startups) and not in a single one (startup), because if we have all the eggs in one basket, what would happen to them if we drop it?

Why should we put the ‘eggs’ in different ‘baskets’?

In addition to popular knowledge, there is a statistical theorem (don’t be scared!) that many of us have probably heard about and even studied at school or university and that explains in a simple way why diversify. Let’s go to it, and remember, you can raise your hand whenever you want to ask ;)

THE PROBABILITY OF INDEPENDENT STARTUPS (EVENTS)

Imagine that we have a basket full of startups (the market) in which we can invest and we decide to take one and invest in it, and it goes through our minds… what is the probability that the startup I have chosen will end up failing after 3 years? Well, let’s assume for now that this probability, on average, is 90%, i. e. as a percentage, 90% of companies end up failing after 3 years of life. 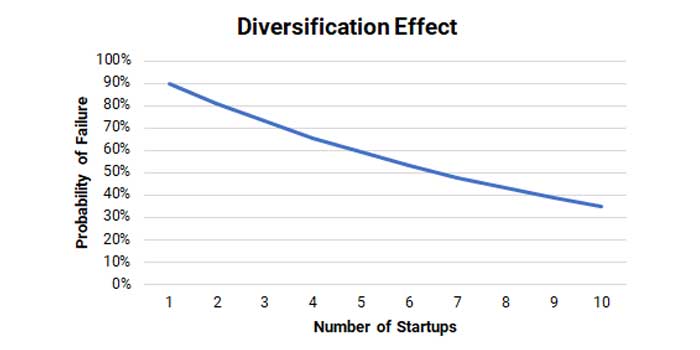 Now, aware that it is important to diversify, we decided to invest in another one, and we ask ourselves again, what is the probability that the second startup I have chosen will end up failing after 3 years? Since the “basket” of startups is always filling up (the creation of new opportunities is constant and even exponential), we will say that it is the same as the failure of the first one we have chosen, 90%.

Therefore, the probability of failure of the 5 startups after 3 years is 59.1%, considerably lower than if we invest all our capital in one, two, three and even 4 startups.This means that…

The greater the number of startups in our investment portfolio, the less risk we have of them all failing and therefore, the greater the likelihood of success we will be able to achieve.

It should be noted that, in addition to the number of startups, diversification is recommended based on:

… because every % (probability of failure) is different and therefore directly affects our chances of success. This is why we always recommend you to invest in several startups instead of concentrating your entire investment on one or two.

Greater the number of startups in our portfolio, the less risk we have of them all failing

HOW CAN YOU DIVERSIFY WITH STARTUPXPLORE?

Using Startupxplore it’s easy to diversify, because instead of having to commit a minimum ticket of between 30,000€ and 50,000€ per deal, you can start investing from much less.

In addition, in Startupxplore we make a varied selection of operations following criteria of diversification in markets, locations, products and of course vintages. Therefore, instead of making a very strong bet on a few companies, it is better to commit a smaller amount but in many operations.

Understanding differences in startup financing stages
Future unicorns: the ten startups with most chances of becoming part of the select 1000 million club
What has brought us here? Startupxplore's retrospective
We present you the evolution of Startupxplore