The Spanish startup ecosystem continues to mature, as investments and exits are increasing by the day as local startups mature and foreign investors come to Spain’s shores to fund the next wave of great entrepreneurs.

Following the Scytl effect, a great quarter for the Spanish ecosystem

Quarter-on-quarter growth was negative (-25%), mostly due to Scytl’s massive €80 million round closed in the third quarter. As visible on the graph above, the number of deals was also down compared to Q3 (30 vs. 41).

In total, Spanish startups raised €179 million in the second half of 2014, demonstrating significant growth compared to the same period a year ago (+153%).

Although most investments in the fourth quarter were once again small and at the seed stage, it’s worth noting that 10 of the 29 surpassed the €1 million mark. 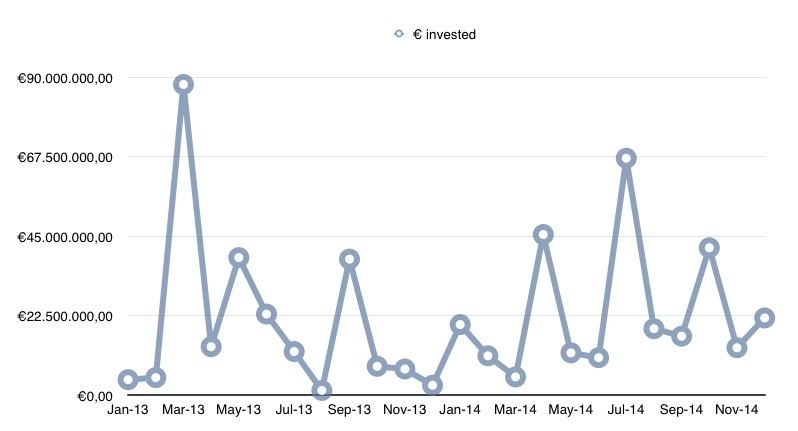 Monthly investments in Spanish startups since 2013

While in the third quarter there were notable investments (both in terms of size and relevance) in companies like Scytl, CartoDB, Socialpoint or Jobandtalent, in Q4 there were also some significant deals involving local startups and, in some cases, foreign investment firms.

Exit activity on the way up

What was very interesting about the last quarter of 2014 was the degree of exits in the Spanish startup landscape, with five notable exits:

Notable exits, a significant increase in investments and more participation than ever from foreign Venture Capital firms. A great year for Spain and there’s more to come, as investments that were made a few years ago will probably start producing more exits and as more VC firms and successful entrepreneurs launch new investment funds.

Want to be part of one of Europe’s biggest startup communities?

From idea to success: the startup journey in 19 quotes
What these startup founders and tech media people shared in 2014
How does a Venture Capital firm work?
5 Ways To Kickstart Your Interior Design Start-Up In 2021