🇪🇸 In our blog in Spanish:
You are at Blog > Analysis > How is the Internet of Things market evolving? The IoT opportunity

How is the Internet of Things market evolving? The IoT opportunity

At some point in the mid 2000s the number of connected devices surpassed the world’s population. According to figures published by European Business Review, by 2015 there will be 25 billion connected devices in the world (3.47 per person) and that number will double by 2020.

This growth will have a tremendous impact in our lives and in the relationship we currently have with the objects that surround us. The availability of cheap bandwidth, sensors, low costs of hardware/software production as well as an increase in capital available to startups and technology companies has expanded the limits of the Internet, which until very recently were constrained to personal computers, mobile phones and other gadgets, but that right now and in the future will affect all devices and objects in the world. This is what most people call ‘the internet of things’.

The ‘Internet of Things’

The idea behind the IoT has been discussed in various papers since the early 90s, when various researches started analyzing the possibilities of creating a network of smart devices. However, it wasn’t until very recently that the IoT hit a mainstream audience, in part as a consequence of the expansion of mobile devices and technology progress in general.

Will every single object that surrounds us be connected in the future?

The theory goes that in the future everything that surround us, either in our homes or in the streets, will be in one way or another connected to the Internet: thermostats, our fridges, the coffee machine, the parking spots available in the streets, traffic lights, farms, etc. And this will create immense opportunities for entrepreneurs and investors looking for the next big thing.

Those opportunities are not only available for startups aiming to build the next Nest, smart device or connected washing machine. The IoT affects many other areas of our lives and cities, making necessary platforms that connect those devices, networks and other types of infrastructure. Also, the Internet of Things could not be understood without the influence of two other big industries, Big Data and the Maker movement, which have also exploded in recent years and that, in conjunction, paint a bright future for consumer and enterprise technology.

Here at Startupxplore we like to look at investment trends and which sectors are in the crosshairs of business angels and Venture Capital firms. And the fact is that in recent years there has been a significant increase in IoT-related deals both in the US and Europe.

According to CB Insights more than $1 billion were invested in US IoT startups in 2013 across 153 deals, a steady increase in funding activity if we were not to take into account Vivint’s huge round in the first quarter of 2012. As expected, given the recent explosion in connected devices and platforms, most deals took place at the seed and Series A stages (64%).

In the case of Europe there’s not as much data available as in the US, making an analysis of the industry in the old continent much difficult, but there are certain aspects that can be highlighted which point to a surge in interest from investors, corporations and entrepreneurs.

Investors, accelerators and corporates are in the game

Over the past few months we’ve witnessed the launch of a variety of initiatives and funds aimed at accelerating or funding the best European IoT startups.

Cisco’s venture arm announced a $100 fund to invest in US and European startups and the American company is also planning to launch a $30 million ‘global innovation centre’ in Barcelona for the ‘Internet of Everything’ (IoE), scheduled to be opened in the Catalan city in 2016.

The biggest engineering company in Europe, Siemens, also announced in 2014 the launch of a $100 million fund dedicated to investing in startups that aim do disrupt manufacturing, another area that is closely related to the IoT from an enterprise point of view. And although other corporates have not announced specific funds to invest in IoT startups, they are certainly keeping an eye on the sector, such as Orange, Telefonica or Deutsche Telekom.

In terms of accelerators, Startupbootcamp recently announced the launch of its newest program focused on the IoT and Big Data. Based in Barcelona and to start in January 2015, it will try to attract some of the best IoT startups from all over the world, promising connections to partners such as Cisco, Yahoo Labs, Telefonica or Mobile World Capital -which are all based in the same 22@ district- while helping transform Barcelona into a European hub for IoT companies.

Internet of Things startups are everywhere in Europe 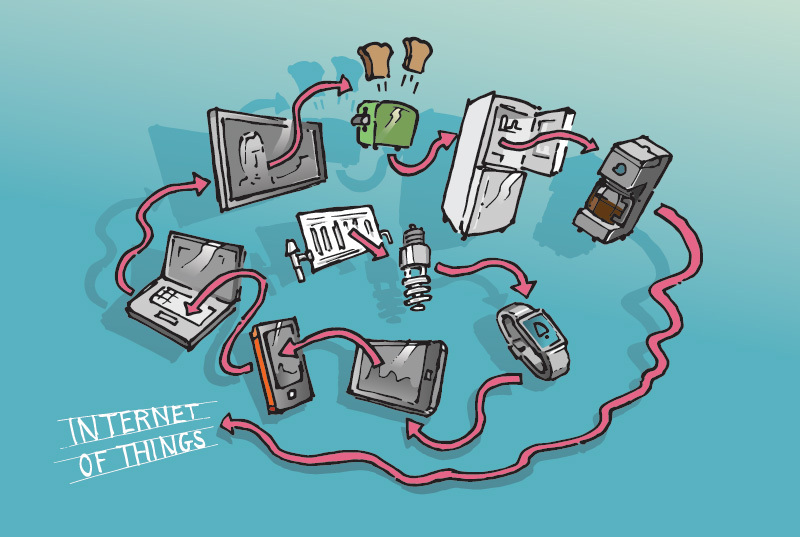 Although some cities such as Barcelona or London are trying to establish themselves as IoT hubs, startups are all over the place in Europe. To highlight this we’ve put together a list of some interesting startups that have made the news in recent months:

Want to be included in Startupxplore’s ‘internet of things’ sector so other investors and entrepreneurs can find you?